Washington, DC – April 9, 2020 — The Secretary of the Interior David Bernhardt unveiled a historic proposal for new and expanded hunting and fishing opportunities on more than 2.3 million acres across 97 national wildlife refuges and 9 national fish hatcheries. The proposal, announced yesterday, is the single largest expansion of hunting and fishing opportunities by the U.S. Fish & Wildlife Service (USFWS) in the agency’s history and further exemplifies Secretary Bernhardt’s commitment to continuing the Trump Administration’s momentous efforts to increase recreational access for hunting and fishing on public lands and waters across the country. The proposal is now subject to a 60-day public comment period. Make your voice heard and submit comments to docket number FWS-HQ-NWRS-2020-0013 to let the USFWS know you support this proposal. SCI will provide more information in the near future regarding comment submissions specific to your region. 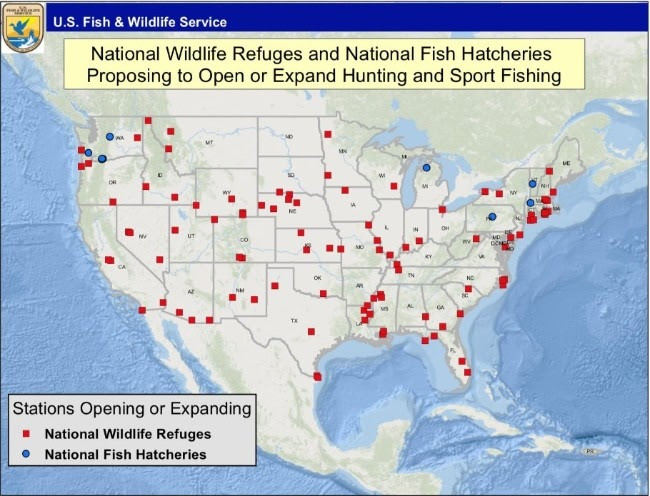 “America’s hunters and anglers now have something significant to look forward to in the fall as we plan to open and expand hunting and fishing opportunities across more acreage nationwide than the entire state of Delaware,” said Secretary Bernhardt. “The U.S. Fish and Wildlife Service’s Hunt Fish Chiefs have been instrumental in our effort over the past two years to streamline our regulations and identify new opportunities for sportsmen and women like no other previous administration.”

If enacted in full, this plan would create nearly 900 distinct new hunting and fishing opportunities for the American public to enjoy. An opportunity is defined as one species on one field station in one state. Coupled with the 2019 expansion of 1.4 million acres for new or expanded hunting and fishing opportunities, this proposal would bring the Trump Administration’s total expansion to an astounding 4 million acres nationwide.

“I deeply appreciate everything sportswomen and men do for conservation and our economy, so I am delighted when we can do something to expand opportunities for them. I hope it will help encourage the next generation of hunters and anglers to continue on this rich American tradition,” said Aurelia Skipwith, Director of the USFWS.

“On behalf of Safari Club International and our members, thank you President Donald Trump and Secretary David Bernhardt for continuing to prioritize American sportsmen by opening up an additional 2.3 million acres of hunting and fishing access,” said SCI CEO, W. Laird Hamberlin. “Hunting and fishing are an integral part of our nation’s culture, economy and care for the land. Increasing access and opportunities for people to take part in our sporting heritage strengthens broader conservation efforts. By delivering on their promise to improve and increase hunting and fishing access, this Administration continues to be a champion for America’s sportsmen, wildlife and wild places.”

Including the units outlined in this proposal, the number of National Wildlife Refuge System (NWRS) units open to public hunting would increase to 399. The number of Refuges where fishing is permitted would rise to 331. In addition, this rule proposes to formally open lands on nine units of the National Fish Hatchery System to hunting or sport fishing.

The NWRS is a network of 568 national wildlife refuges and 38 wetland management districts. There is a refuge within an hour’s drive of most major metropolitan areas. The NWRS attracts more than 59 million visitors annually and the refuges provide vital habitat for thousands of species, and access to world-class outdoor recreation, including hunting and fishing. There are a total of 70 national fish hatcheries managed by the USFWS, and collectively they draw more than one million people each year. Hatcheries offer opportunities for viewing the operations and learning about fish, as well as activities such as fishing, hunting, hiking, sightseeing, nature study, birdwatching and photography.

SCI welcomes today’s developments and the opportunity to explain the benefits of hunting to the public. Additional hunting opportunities and increased hunting access means more for habitat conservation and the resources the States need to actively manage wildlife. Click HERE to see more details about this historic DOI register notice.

###
Safari Club International – First For Hunters is the leader in protecting the freedom to hunt and in promoting wildlife conservation worldwide. SCI’s approximately 200 Chapters represent all 50 of the United States as well as 106 other countries. SCI’s proactive leadership in a host of cooperative wildlife conservation, outdoor education and humanitarian programs, with the SCI Foundation and other conservation groups, research institutions and government agencies, empowers sportsmen to be contributing community members and participants in sound wildlife management and conservation. Visit the home page www.SafariClub.org or call (520) 620-1220 for more information.