The Four Corners Chapter of Safari Club International is a conservation and hunting organization that raises money and provides conservation, humanitarian, education, and other outreach in the Four Corners Area of the Western United States. The chapter has also created a hunting mentorship program, called the Legacy Project.

Chapter President Matt Howell says the group launched the program after learning of local youngsters who wanted to hunt but whose families didn’t have access to hunting guns. Wanting to help these youngsters, the project took off. 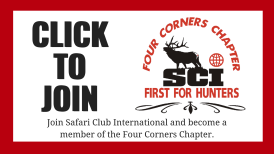 They started off with a hunting rifle, then the Four Corners Chapter added a scope, ammunition, hunting gear, and equipment. Knowing hunter education would be required prior to heading to the field and wanting the youngsters to be prepared and safe in the field they added a range safety course but didn’t stop there.

Next, they approached Hodiak Outfitters of Arboles, Colo., and asked the owner, who’s a former board member of the organization, if he would be willing to help. The company agreed, in conjunction with Gallegos Ranches, to donate guided big-game management hunts to the award recipients. The Chapter now offers the Legacy Project award winner a full hunt package.

One of those would-be hunters is AJ Connors, whose school principal nominated him for the Legacy Project. The then 14-year-old, who is of Native American descent, wanted to learn to hunt but didn’t have a family member who hunted. AJ received the Legacy Award in spring of 2018.

Over the year, AJ attained his hunter-education certification, learned to shoot his new hunting rifle, and attended range safety days where he learned safe shooting scenarios and positions. In December, he joined Hodiak Outfitters on a mule-deer doe hunt where he worked hard to get into position and ultimately shoot his first big-game animal. The guide taught him about field dressing, and board members volunteered to instruct him in processing the meat.

AJ says he’s “most excited to cook meals for my younger brothers,” and that he’ll definitely be hunting again. The Four Corners Chapter is proud to be sharing the hunting traditions with others.

Like Loading...
‹ Join Us at the Mountain Archery Festival
Flextone Changes The Game With Funky Chicken Gen 2 Decoy ›